When starting different projects, companies always face the need to have some skilled professionals in their team to make things go faster. In this case, Qubit Labs is ready to help you hire one Flutter developer or build up a dedicated development team. Having extensive experience in offshore development, we have created a flexible model to meet our requisitioners’ demands.

Thanks to staying in touch with a significant number of the top-notch Ukrainian IT specialists, we will be glad to assist in finding Flutter developers who will join your team. Qubit Labs provides the professionals with offices to work from, guarantees high quality and offers attractive pricing and other benefits. We will take care of the retention, offer social packages to your dedicated team, and support the camaraderie.

WHAT DO WE OFFER?

Qubit Labs is an EU-based outsource company with an R&D office in Kyiv, Ukraine. We provide you with the opportunity to focus on the main tasks and avoid wasting time on management-related processes. With Qubit Labs, you will be offered a wide selection of top-notch specialists who will meet the requirements of your Flutter developer jobs. Our services enable building an offshore team or finding a single Flutter developer for your project.

WHAT CAN YOU BUILD WITH FLUTTER?

When using Flutter for cross-platform applications, the advantages of native development will allow you to reuse most of the code between different platforms. The hot reload function builds a Flutter app from widgets literally within seconds, and Flutter icons will make your digital products look unique.

Flutter SDK is usable for creating 2D games, and the drawing speed and performance are combined with several useful functions. Flutter development continues evolving, and you can find multiple repositories to the games on GitHub.

You can utilize standard web technologies, like JavaScript, HTML, and CSS, to generate Flutter web content. Moreover, there is an opportunity to deploy a compiled code into a client experience. 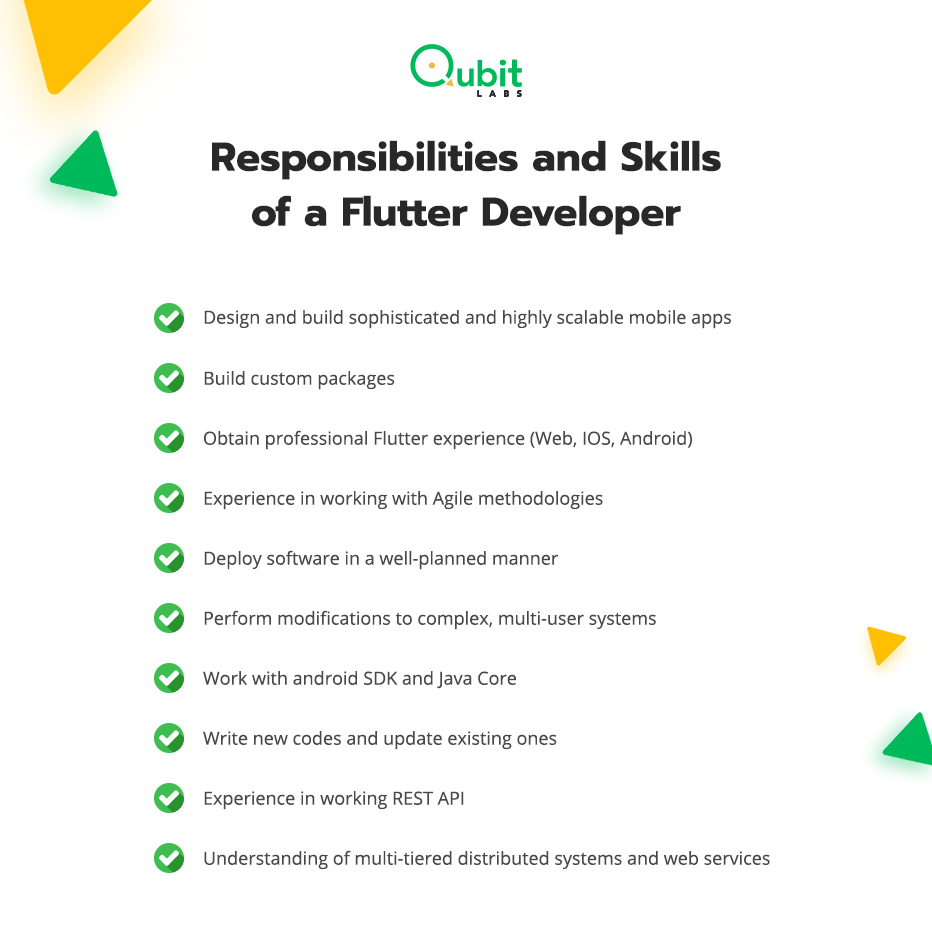 Native rendering, independence from OEM widgets, and a broad toolkit for the developer significantly speed up coding and support two platforms at the same time. It also enhances the quality of Flutter experience.

Support of a large number of platforms

Flutter SDK already supports Android, iOS, and Web, as well as the upcoming Google Fuchsia platform. So any project can be immediately imported to the new OS. The app written with Flutter looks and works the same on both iOS and Android.

Thanks to pixel perfect rendering, testing and elimination of platform-dependent bugs and layout nuances are much faster.

When speaking about Flutter vs React Native, the first one allows you to quickly solve application problems, especially related to the user interface. Native compilers are already built into the framework, and code written with Dart turns into native instructions for ARM processors.

The community headed by Google has developed comprehensive instructions and Flutter tutorials for beginners. There are various video lessons on the Internet that will help you to find out more about Flutter SDK, as well as many opportunities to work with codes online.

Flutter is based on Dart, which allows writing well-structured program code and creating more complicated apps and hierarchical structures.

Whether you are a Flutter app development company or a startup, the best way to benefit from the chosen technology is to work with the best IT specialists. Qubit Labs offers working with our well-established business model that will allow you to gain from the quality-to-price ratio. Obtaining considerable IT industry and Flutter experiences, our HR and management team will help you with all the recruitment-related activities, like paperwork, accounting, and retention. When choosing Qubit Labs as a vendor that will find a candidate for your Flutter developer jobs, you can be confident in on-time delivery, cost-efficiency, and absolute transparency at all cooperation stages.