IT Outsourcing to Ukraine: Top Cities Where You Can Hire Ukrainian Developers

Ukraine is one of the most popular and rapidly developing IT hubs in Eastern Europe. It’s a reliable partner of thousands of foreign companies of different sizes and cooperates with global tech leaders, including Google, Microsoft, and Oracle. Local professionals are recognized among the most skilled developers in the world due to their solid tech expertise, high level of English proficiency, and experience of working on projects of various complexity levels.

However, when hearing about Ukrainian IT outsourcing, business owners usually associate it with Kyiv, the country’s capital, forgetting about the capacity of other cities. That’s why Qubit Labs wants to describe other Ukrainian IT hubs to shed light on a handful of untapped opportunities.

IT Outsourcing to Kyiv

This city of numerous opportunities sets trends for IT development in the country and is the birthplace of the most famous Ukrainian startups. It boasts the highest concentration of developers in the country, and our list won’t be complete without Kyiv. So, these are some of the most notable facts about the tech development in the Ukrainian capital: 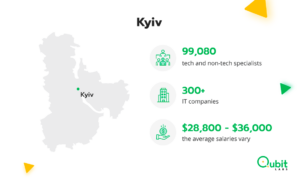 The city located in the Western part of Ukraine boasts an impressive start-up mentality, attracting foreign investors and being another local trendsetter in the IT industry. Lviv focuses on establishing inspiring IT communities, which help like-minded people gather and come up with top-quality products. 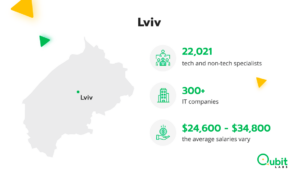 Lviv is the only Ukrainian city that has implemented a competitiveness strategy, according to which IT is one of its priority areas. This means that the representatives of local government, businesses, and the public have come together to develop the IT industry. This synergy is also one of the peculiarities of Lviv because it is not often in Ukraine that such a level of cooperation and mutual understanding between these three categories is achieved. They work alongside to make more and more IT professionals choose Lviv as a city to live in.

IT Projects Outsourcing to Kharkiv

Kharkiv is referred to as the “city of students.” This implies that one can easily find junior specialists in Kharkiv and seniors as well because many successful Ukrainian IT companies have their roots in this city. 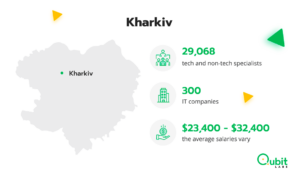 Excellent programmers, the long-term history of the local market, and the proven experience level of Kharkiv developers are the factors that form a competitive environment, in which appear effective teams that can implement any, even the most daring, ambitions.

IT Outsourcing to Dnipro

Despite being less saturated with IT companies, Dnipro still holds its position in the local rankings of the flourishing tech hubs. Its tech development is growing slower yet steadily enough.

Dnipro is one of the five largest outsourcing cities, with thoughtful and attentive programmers. Therefore, companies with a flexible recruiting policy aimed at prolonged results are growing in the city. This strategy allows the city to slowly but surely increase the number of programmers by 10-30% per year.

IT Projects Outsourcing to Odesa

Being an attractive outsourcing destination for a bunch of foreign companies, Odesa is also home to talented developers and non-tech specialists. Local professionals are valued among employers for their ability to deal with any project and deliver top-notch results. 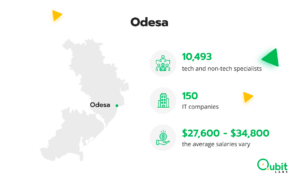 Odessa outsourcers have been and remain the drivers of the region’s development, not only due to the constant employment of juniors but also because they hold or sponsor professional meetings and conferences. The peculiarities of the Odesa IT market include the stability of employees because they do not change their workplace as often and easily as, for example, developers in Kyiv.

Have you ever heard of Vinnytsia? This city is smaller than the previous ones, so local salaries are lower, implying that’s a cost-effective outsourcing solution for many organizations. Although the number of developers gives way to Kyiv and Lviv, you still can find the developers specializing in popular technologies in this city. 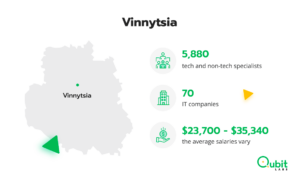 Vinnytsia has great potential in the IT sphere. Over the past few years, a handful of IT companies were founded in the city, which creates a healthy competition necessary for their development.

Another not that popular Ukrainian IT outsourcing hub, which yet has immense prospects for the future, is Ivano-Frankivsk. Thanks to being less expensive to live in, the city has lower salaries, but its developers exceed the expectations of employers. The professionals aim to follow the trends set by their colleagues located in the neighboring Lviv. 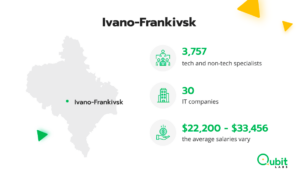 Although being less sought-after compared to other cities, Cherkasy offers cooperating with skilled developers who are able to turn ideas into reality. Besides, since the competition in the city is lower, it’s easier to build a team of vetted professionals. 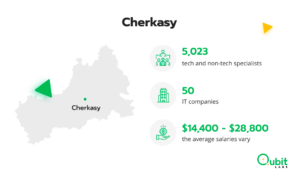 IT Outsourcing to Chernivtsi

This small city located in the West of the country offers hiring developers that are experienced enough in working with outsourced companies. So, it won’t be a problem to find a common language with local programmers. 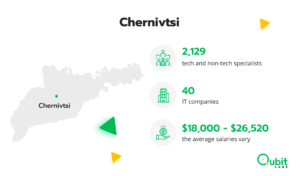 However, there are problems: it is difficult to find developers above Junior experience level. At the moment, Chernivtsi has several large IT companies and about 20 smaller ones of various directions and sizes. More than 60% of companies in Chernivtsi are engaged in outsourcing.

You might have heard of Zaporizhzhia since it’s one of the largest Ukrainian cities. There, you can hire programmers with impressive tech stacks that are ready to work in scalable teams. 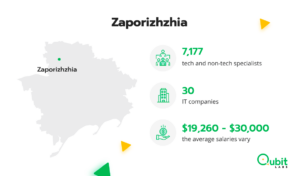 IT Outsourcing to Uzhgorod

Although Uzhgorod is rarely listed in the rankings, it’s still worth attention. It boasts developers with a European-like mentality and talent for creating high-quality products. One of the most significant benefits of cooperating with local professionals is the lower development cost. 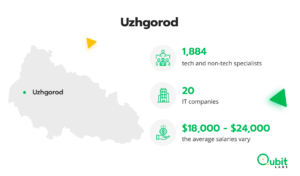 Uzhhorod is the city that is located the closest to 12 European capitals. New companies appear regularly in the city — foreign IT employers establish their offices or local representatives of the IT community create their own companies. The main disadvantage of the IT industry in Uzhgorod is the small number of candidates with the necessary knowledge, especially of senior-level.

IT Outsourcing to Poltava

And the city that completes our ranking is Poltava. There, you can find many junior-level programmers who are still studying at local universities or mid- and senior-level ones who already have significant experience working at international tech companies. 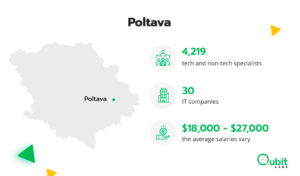 Poltava is attractive in the long term due to the fact that the “ground” for the development of the future IT industry in the region is being prepared now.

To sum up, the Ukrainian IT market has vast potential, spread over different country cities. Business owners are the ones to choose which option suits them better, based on the size of their projects, budgets’ limits, and the desired programming languages and technologies.

It’s no wonder that the biggest cities, including Kyiv, Lviv, and Kharkiv, offer the most diverse talent pools, technology stacks, and travel opportunities. However, they suit best for projects with big budgets because the salaries of local developers are higher than in other cities.

In case you want to save money on software development or your project isn’t large, you can confidently outsource to smaller cities, like Ivano-Frankivsk, Vinnytsia, or Poltava. Dnipro and Odesa are also great options because many programmers live in these cities, yet local salaries are equal to those in the three first cities.

IT Solutions and Startups for Agriculture presented on AGROIT forum 2020

Just recently, on September 17, 2020, Ukraine hosted its fifth annual forum for IT-solutions and innovations in agribusiness AGROIT forum 2020. This...

Ukrainian Startups That Are about to Change the Tech Industry

Ukraine is replete with startups and talented developers, the number of which grows each year. Despite the challenging economic situation in the... 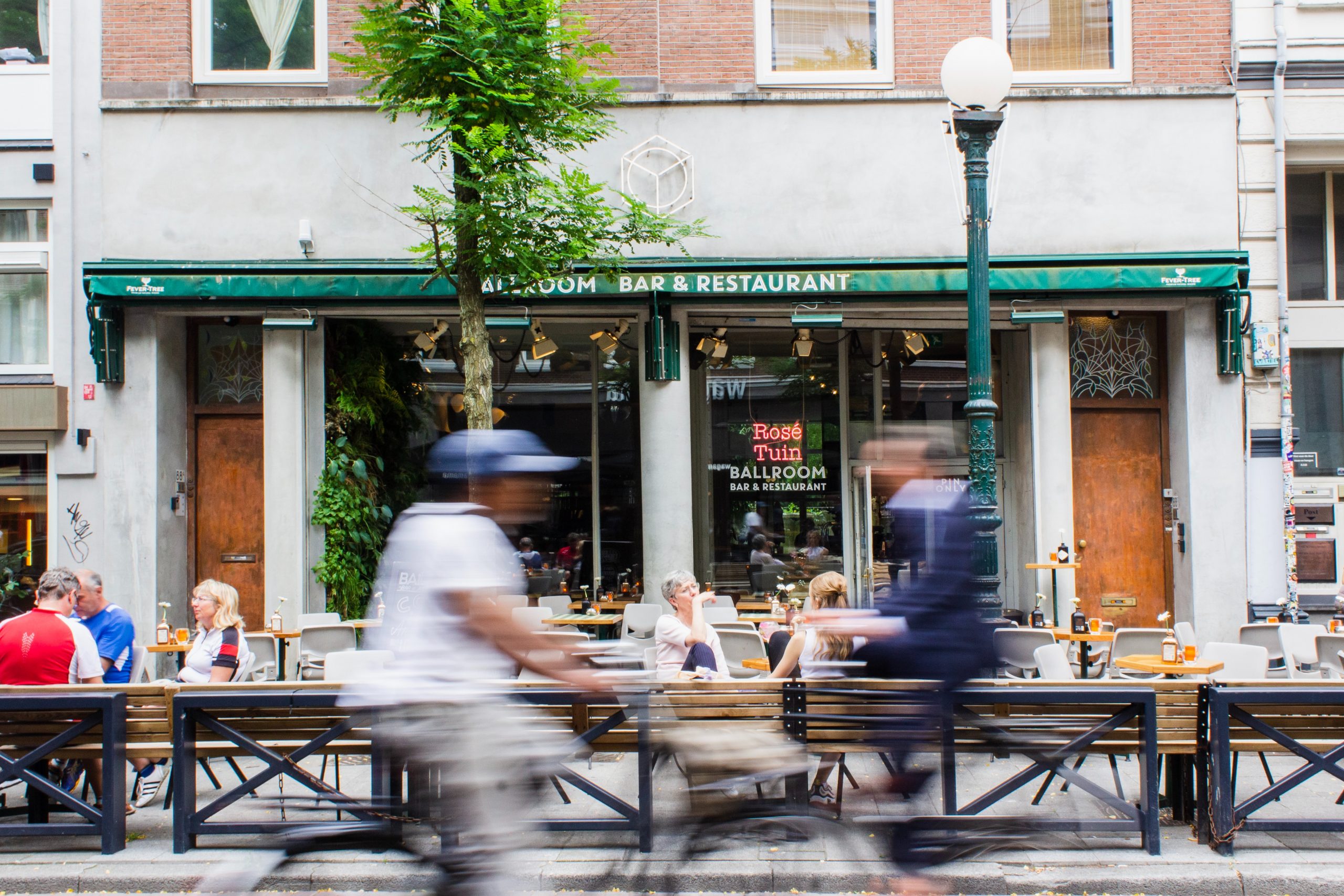 Why Opt For Restaurant App Development?

Food delivery has always been a convenient service, and everyone would agree that it is booming nowadays, considering the situation in the world. The... 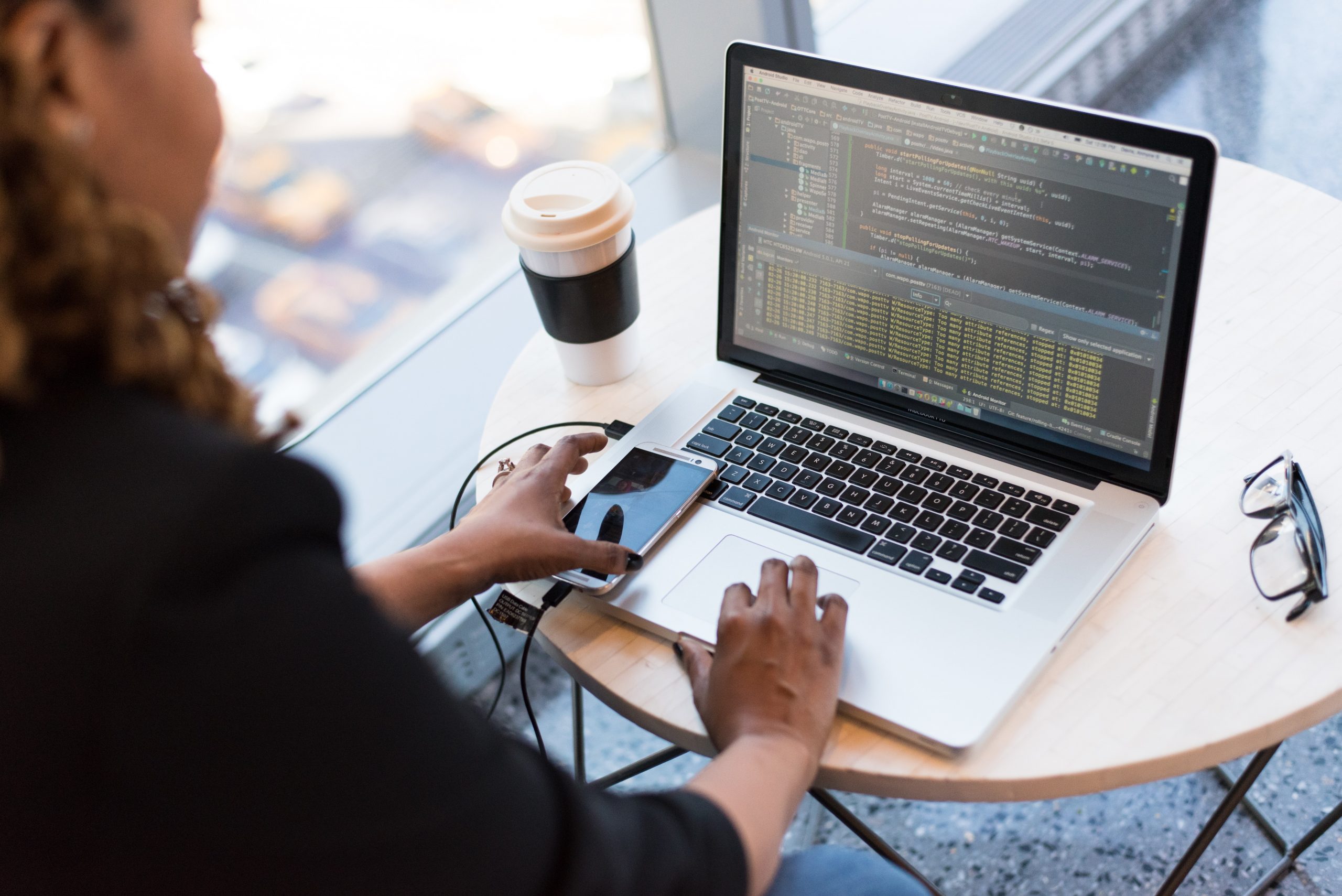 Oksana Zabolotna
HBD at Qubit Labs
Oksana is a team leader of sales and marketing team at Qubit Labs.
Previous
How to Hire the Project Manager that will Fit Your Requirements?
Next
Agritech Software Development: Expertise Requirements
This site uses cookies. By using our site, you agree to our Terms and Privacy PolicyAGREE
Privacy & Cookies Policy