The demand for SQL developers continues to rise because this is a general-purpose programming language that enables an effective interaction with Bid Data. It has a well-defined structure and follows established standards. Almost all databases use SQL, and some of them include the abbreviation of this programming language in their name. These include Microsoft SQL Server, MySQL, and PostgreSQL, to name a few.

The current job market is full of offers for skilled SQL programmers, so it’s necessary to be aware of the average SQL database developer salary in the world to stay competitive. Qubit Labs is here to help you understand the situation in the industry and be able to attract top SQL programmers to your dedicated development team.

Different sources mention contrasting numbers, for example, according to Zippia, a mid-level SQL developer salary in the US is around $91,000 per year.

Meanwhile, as per PayScale, this number reaches  $76,529per annum.

So, to understand the SQL programmer salary you’ll pay to your developers, it’s necessary to take into account the state. The wages in, say, San Francisco and Atlanta differ several times. That’s why we have selected some of the most rapidly developing tech hubs of the US to see the average SQL developer salary in USA for each experience level. 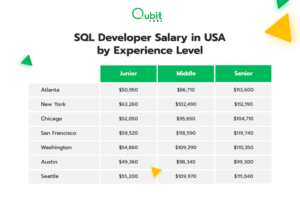 The Average Annual SQL Database Developer Salary in the World

When comparing SQL engineer salary in the world, we have decided to settle for the average numbers. There are many factors, like the availability of additional skills, additional qualifications, and the company’s size and specialization, to name a few, that affect the wages.

For example, as per Talent.com, the average SQL database developer salary reaches $66,403 per year.

At the same time, Australia pays the average SQL server developer salary of $74,674 on an annual basis.

To make things more clear, let’s take a closer look at the average SQL developer salary in the world’s flourishing IT hubs. 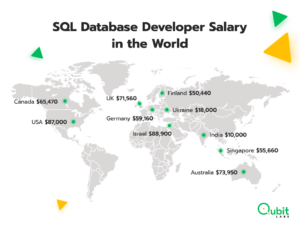 Freelance SQL Developer Salary in the World’s IT Hubs 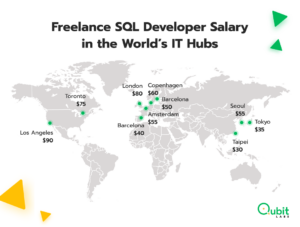 According to the most recent research, SQL is the third most popular web development language. After questioning 57,378 respondents, it was found that 54,7% of them prefer SQL over other programming languages. As for the professional developers, this number reaches 56,9%.

Actually, it’s not surprising because data use and processing are critical for the IT industry, and SQL helps to facilitate these activities, allowing to deal with terabytes of generated data.

What are the advantages of using SQL?

In general, SQL is a powerful tool that allows users, programs, and computing systems to access the information stored in relational databases. The most significant benefits of SQL are the following:

As you can see, SQL has several significant advantages and is sought-after on the market. If you want to attract top-tier specialists, it’s essential to offer them a competitive SQL developer salary. According to our research, the highest rates for this programming language are in the US and Western Europe.

However, you can opt for outsourcing and pay less money while receiving high-quality services.

In case you’re new to outsourcing software development, let Qubit Labs help you. We are experienced in this field and have several successful corporations in our portfolio. So, don’t hesitate to contact us and start turning your ideas into promising projects.

Learn to how to build offshore development teams wiselyAbout Iva KozlovskaWhy an e-book about offshore team?What will you find in the book?Who will...

Why Do South African Companies Work With Qubit Labs?

We are proud to have clients from all over the world because we offer many benefits and the best decisions for business growth in every country....

How the investment market changed during Crisis? What should tech companies and startups expect?

Surely, this is not how most of us pictured the “roaring twenties” of this century, and 2020 has been quite a shock to all of our systems so far...
Qubit Content
Previous
When Crisis Is An Opportunity To Grow Online
Next
9 Main Things to Include in Your Pitch to Investors
This site uses cookies. By using our site, you agree to our Terms and Privacy PolicyAGREE
Privacy & Cookies Policy