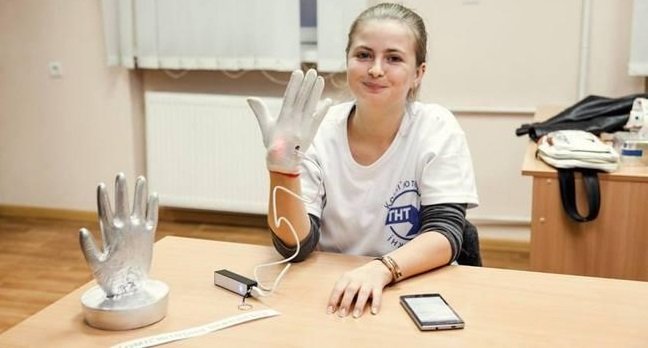 Today Qubit Labs presents the interview with a techie girl who created a talking glove for the hearing impaired people.

Internet is full of news about entertainment inventions. No wonder, people like them, people buy them, so it’s a great way to make money. But besides happiness and money there is one more thing of ultimate importance – health. Luckily, the young generation of inventor realizes this simple truth pretty well, and puts a lot of efforts to make lives of challenged people easier.

Tamara, could you please tell us more about your project. What kind of device is it and how it works?

ISIOY (I Speak Instead of You) is a glove-like device that translates sign language into speech. It connects with a smartphone via bluetooth. When a person signs, the data from the glove is sent to the phone. The phone with an installed app voices the word or utterance. Every expression has its sequence number recorded in both devices, and the phrase with the corresponding number is pronounced.

How did you get the idea to voice a sign language?

The idea just struck my mind. When I was a third-year student, our microprocessing systems professor Andriy Nedoshytko told us to prepare a term project and a working model by the end of the year. I had lots of ideas and thoughts, but I suggested this one – why don’t we make a device for converting sign language into speech? He liked my idea, and we started working on it. At first, it was just a term project, but later it turned into a graduate project. I didn’t have any friends among hearing impaired people, but now I have lots of them; and now when I know their needs, I want to help them even more. 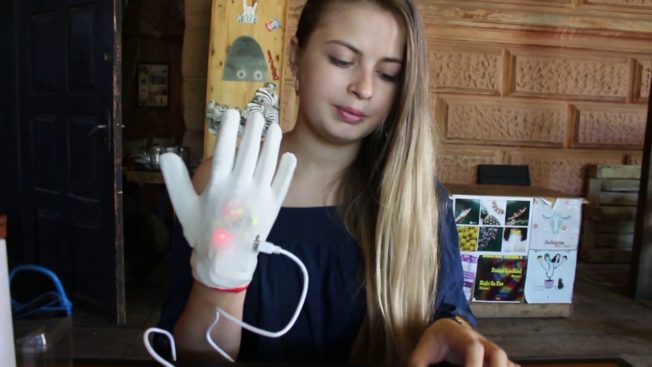 Are there any analog devices in the world? If so, what are the advantages of yours?

There are a few analogs, but they are focused on the existing sign language. Only few of them connect with smartphones. The advantage of our device is that the glove fits the needs of the people who don’t know sign language. It works for people who underwent surgery on the throat, had blood stroke and temporarily lose their voice.
To communicate with the help of the glove you don’t need to have a command of sign language, you can make your own. Users can invent their own language. A person programs every gesture on his/her own, it takes less than 15 seconds, every gesture can stand for a letter or the whole sentence. For example, how can I get to the city center? Currently, the glove is preset for nine gestures, but we are going to increase the number.

Have you tested the device with hearing impaired people? What do they think about your device?

We’ve visited Ukrainian hearing impaired community in Ternopil. They got to know the device. Acoustically challenged Erik Skrynnyk, 25, agreed to test the glove. He thinks nobody cares about this category of people, so he was really surprised to find out he was wrong. At first, he took the glove with caution. But when Erik started programming, he liked it very much. He says the device will definitely help communicate with people who don’t know sign language. 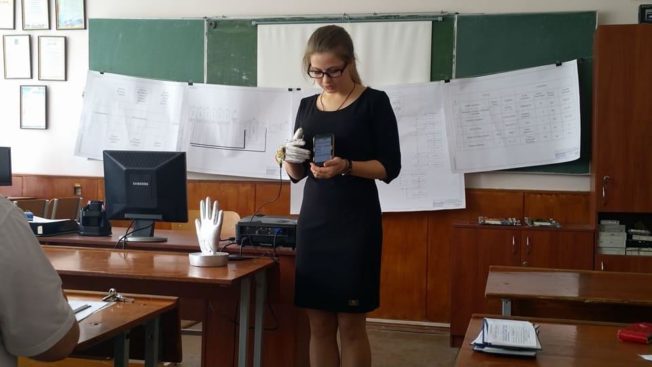 Are you going to develop the project? What are your plans for the future?

Of course, we are going to develop it. We are picking a team to work on the project. We are going to make the glove smaller and easier to use. We’d like to make it available for hospitals. As it was mentioned above, there are people who suffered a blood stroke, and most of them are paralyzed. If a patient can use one hand, he/she will be able to call a doctor.

Are there any Ukrainian or foreign developers you look to or devices you are fascinated with?

Unfortunately, no. But I hope I’ll find them soon.

Qubit Labs made a series of interviews with young Ukrainian inventors. Check out the next interview by visiting this page.

Client’s Request for Machine Learning Team And Goals Google, Facebook, Uber, Amazon, Spotify… What do these companies have in common? The...

Updated 2021 Are you looking for a web development agency in Belgium outsource your software project to nearshore software company or hire a...

Intro JavaScript is considered to be one of the best programming languages widely used to create multi-functional web applications, design...

Julia Kravchenko
Author
Julia Kravchenko is an author at Qubit Labs blog, sharing her experience in team management and Ukrainian market updates.
Previous
100+ Best Tech Blogs to Follow: Latest Technology News and Projects
Next
8 Innovative AI, IoT and Big Data Technologies Made in Ukraine
This site uses cookies. By using our site, you agree to our Terms and Privacy PolicyAGREE
Privacy & Cookies Policy