Outsourcing software development has become one of the most popular go-to solutions for companies looking for a quick fix to skill shortages, saving money, and driving business flexibility.

Many destinations worldwide have become alternatives for outsourcing for multiple global leaders, and Eastern Europe is one of the most popular regions. Countries located in this area allow hiring the developers of any stack for a reasonable cost and without worrying about any cultural misunderstandings.

That’s why outsourcing development to Poland is kicking into high gear. The country is known for its fast-growing economy, stability, and increasing interest in the world’s most popular technologies. The number of talented developers within the country is rising as well because people see the high number of perspectives offered by the tech industry.

There are many reasons for outsourcing development to Poland, and Qubit Labs will highlight the most notable aspects in this article. So, let’s get down to the topic.

How Many Software Engineers Are There in Poland? 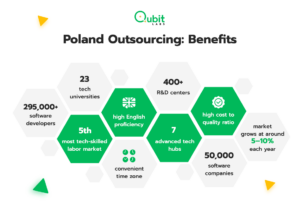 In Poland, there are over 295,000 software developers who are skilled enough to work on projects of different complexity levels. The country offers a great “mixture” of ambitious graduates who want to dive deeper into the tech world and their more experienced colleagues with impressive portfolios.

The local talent pool is rapidly growing each year because the country has 23 tech universities, which graduate around 63,000 students annually. The software development in Poland truly gives access to the vetted developers. It is one of the most popular places for studying in Eastern Europe.

Some of the local universities made it to the global rankings, being considered the most thriving technical education providers.

Notably, Poland outsourcing is one of the most significant drivers of the local economy, and there are around 690 outsourcing companies in the country, as per Clutch. And due to the high competition for local developers among the foreign businesses and R&D centers located in the country, outsourcing development to Poland grows by leaps and bounds.

The Availability of Tech Hubs

Poland is referred to as a perfect landscape for global companies because the country boasts a competitive employment sector. It experiences a continuously rising number of vocational accelerator programs, which attract many young professionals. There are many co-working spaces and innovation labs located in different tech hubs all over the country.

As per Harvard Business Review, Poland ranked 5th among the most tech-skilled labor markets in the world. Some of the leading tech companies cooperate with local IT specialists. For example, Microsoft recently announced a $1 billion digital transformation plan for Poland. At the same time, Google decided to establish a strategic partnership with Poland’s Domestic Cloud Provider.

Within the last several years, Poland has definitely stepped on the road toward self-sufficiency. It becomes more evident since the country is no longer waiting for the next investment from the EU or trying to catch up with other leaders. Poland now has all the capabilities to follow its own path of development.

Often, business owners have the following question: is Poland a good location for outsourcing? Usually, they get a positive answer. There are 7 rapidly developing tech hubs, an active startup ecosystem, and a robust digital infrastructure.

The most popular destinations for outsourcing to Poland include: 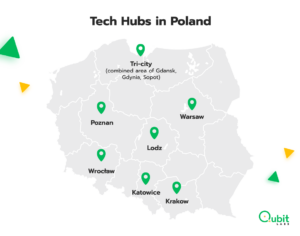 Although the majority of local startups are located in Warsaw, some of them are growing in other cities, which is a sign of the advanced Polish tech ecosystem.

Is Poland Good for Startups?

Poland is home to many world-known startups, so you can be sure that outsourcing to Poland is a decision that might help your business skyrocket.

Also, seeing is believing, so here is a list of the most prominent Polish startups:

Moreover, the availability of incubators, accelerators, and platforms is critical for improving a startup ecosystem in a country. They help establish an atmosphere where the specialists can share their experiences, expand networking, mentor others, and boost creativity. The number of accelerators in the country is rapidly growing, and the areas of their specialization are getting wider each year.

Since Warsaw is one of the drivers of the development of IT in Poland, here are some of the most notable local accelerators, incubators, and platforms:

Also, in Warsaw, there is a Google Campus, which is one of the primary locations where startups can find the best of Google and turn their ideas into reality.

Most Poland startups prefer selling their services and products to businesses, and, what’s interesting, money isn’t the most crucial factor for them. Instead, they prioritize creating the products that influence the companies’ decisions and facilitate business processes.

Besides, the local startup scene boasts an impressive number of female entrepreneurs. They are interested in developing solutions that can positively affect the future and ensure sustainability for users.

Are there any R&D Centers in Poland?

Aside from the traditional outsourcing to Poland, the country boasts an expanding number of R&D centers. Around 400 international companies have already established their R&D centers there.

Here is a list of some of the organizations that saw the potential in Polish programmers and built their R&D centers in the country: 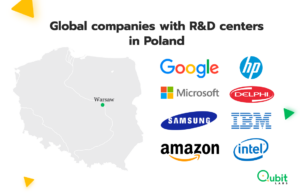 The availability of the offices of the mentioned companies in the country has significantly facilitated software development in Poland. Now, the local tech sector includes three interrelated sub-segments, namely hardware, software, and IT services.

How Many Software Companies are in Poland?

Poland is often referred to as the “IT center of Europe.” This is due to the increased demand for Poland outsourcing among foreign businesses and local developers’ emphasis on using top-notch technologies.

The number of software companies in Poland reaches 50,000, and, as per Clutch, around 857 of them offer custom development services. These numbers are impressive, given that the tech sector is still relatively young in the country. Around half of the existing operating enterprises were established after 2011. 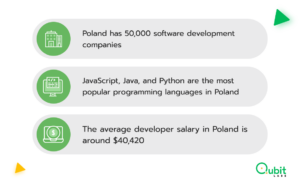 You can easily find an outsourcing company in Poland specializing in web, mobile, or system development because these are three major branches of the local IT system. Also, there are full-stack companies that offer an extensive range of services.

Depending on your preferences, you can build products using backend and frontend parts. The expertise of the software companies in Poland varies depending on their customers’ needs. You can find vendors to create websites based on ready-made solutions (e.g., WordPress) or those experienced in custom web applications utilizing innovative architecture or infrastructure.

Also, if you outsource to Poland, you’re offered to create mobile apps based on the most popular operating systems and those using hybrid technologies. Enterprise web apps, SaaS products, e-commerce platforms, and CRMs are also among the most sought-after solutions of Poland outsourcing.

Is Poland good in technology?

Yes, it is. The most popular programming languages in Poland are JavaScript (24%), Java (21%), and Python (15%). Also, many programmers specialize in more sophisticated areas of development, including cloud solutions, API-based and mobile solutions.

What are the Average Salaries of Polish Programmers? 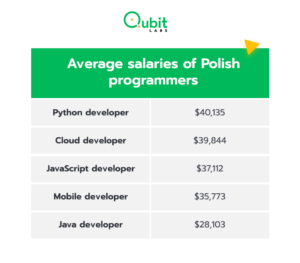 For this block of our Poland outsourcing article, we considered the three most popular programming languages in the country and top specializations among local developers.

Therefore, the average programmer salaries in Poland are the following:

Nevertheless, as mentioned by HackerRank Developer Skills Report, the average developer salary in Poland is around $40,420 (according to the insights based on 116,648 programmers).

The three most common payment models for any outsourcing company in Poland are fixed-price, time and material, and body leasing.

The Development of IT in Poland — Tech Nominations

According to the research provided by TopCoder and HackerRank, Poland now takes 3rd place in their lists. As per Kearney Global Services Location Index, Poland made it to 14th place (out of 60), experiencing an increase in the digital resonance scores.

Also, Poland often hosts various tech events, and the top ones include:

Another factor that makes Poland outsourcing stand out among other destinations is its proximity to major European tech centers, like London, Paris, and Frankfurt. You can easily get to Krakow or Warsaw from Berlin, Brussels, and Zurich as well, and the trip will take around 2 hours by plane. 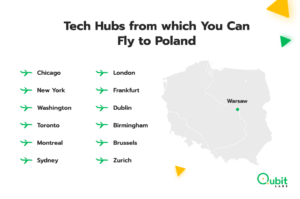 What is the English Level of Polish Developers?

Technical experience and English skills are critical but cultural and work ethics also play a significant role in auspicious cooperation. The approach to work of Polish programmers is similar to the one followed by US and Western Europe-based companies.

Local programmers have an open mindset, and you can easily find a common language with them. Thanks to their extensive experience of working with global companies, they understand the preferences of international customers.

When opting for Poland outsourcing, you can benefit from a convenient time zone difference. It has the same time zone as Germany and France, and there’s only a one-hour difference between Poland and the UK. If you’re a US-based company, your outsourced team will start its working day earlier, presenting the results of its work to you as soon as you log in.

Due to the high quality of technical education, determination to projects, and hungry-for-success developers, Poland is considered one of the best outsourcing destinations in the international market.

Usually, outsourcing development to Poland implies a high cost to quality ratio, and it’s easy to cooperate with Polish programmers because they’re well-versed in the Agile approach and methodologies.

IT Outsourcing to Poland: a recap

So, why is Poland outsourced?

How to Hire a Developer in Poland?

Qubit Labs is an offshore team hiring services provider that makes building dedicated teams easy and risk-free. With us, you can scale your team by hiring vetted developers. You’ll focus on core business goals while we handle the back-office hassle.

Reach out to us today to discuss your ideas during a free consultation call.

We are always proud when we build a strong business relationship with our clients, especially when they stay with us for years. Even during the hard...

What comes first to your mind when you think of the UAE and Middle East? Hot climate, great sea resorts, ultra-modern architecture, and maybe oil...

Ukraine is one of the most popular and rapidly developing IT location in Eastern Europe. It’s a reliable partner of thousands of foreign companies...

Oksana Zabolotna
HBD at Qubit Labs
Oksana is a team leader of sales and marketing team at Qubit Labs.
Previous
Full Guide on How to Hire Remote Developers in 2022
Next
How Would You Overcome Communication Challenges on a Remote Team? Insights from Startup Owners
This site uses cookies. By using our site, you agree to our Terms and Privacy PolicyAGREE
Privacy & Cookies Policy