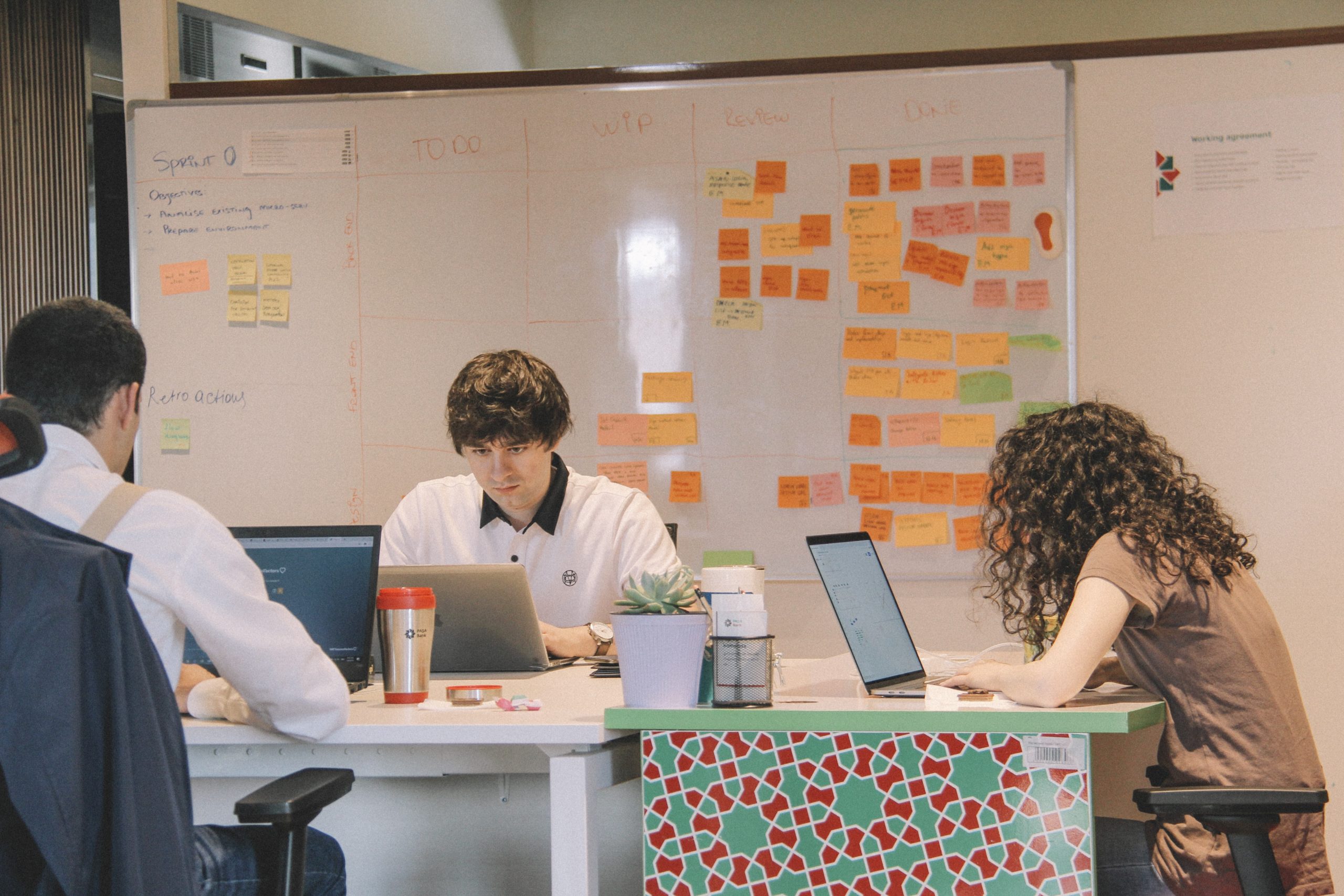 What is Scala Used For?

Qubit Labs can make bold to say that most Scala developers have transferred to it after Java because these are two similar programming languages in the means of syntax and realized tasks. There are two services, which are often implemented by Scala programmers.

The first one is Akka, a library, which enables to simplify the development of multithreaded and distributed applications. The second one is called the Play Framework, which is a full-fledged framework, sometimes referred to as the “skeleton of development.” Its main task is to increase the code’s productivity and display the browser’s emerging bugs.

Scala is a hybrid programming language, which has inherited the capabilities of object-oriented and functional languages, namely Java and C#. There are many reasons to choose Scala over other programming languages, like the fact that it is the most highly-paid, which is on average $76,000. Twitter, Coursera, Foursquare, LinkedIn, Netflix, and Tumblr are just a few examples of world-known companies using Scala. These days, it has become one of the most robust alternatives to Java because it facilitates increased productivity and reliability of the systems. When developing this programming language, the programmers followed two principal goals, namely:

In Scala, there is a balance between expressiveness and abstract complexity. It has tools required for complex tasks, but if one doesn’t strive to do that, he/she can write simple codes as well. Scala’s breakthrough took place back in 2009 when Twitter announced its migration to this language by writing a significant part of the server code with it and continuing to work in this direction. Moreover, Scala can be easily merged with Java, giving the opportunity to develop Android apps, and the option of compilation with JavaScript allows developing web applications. 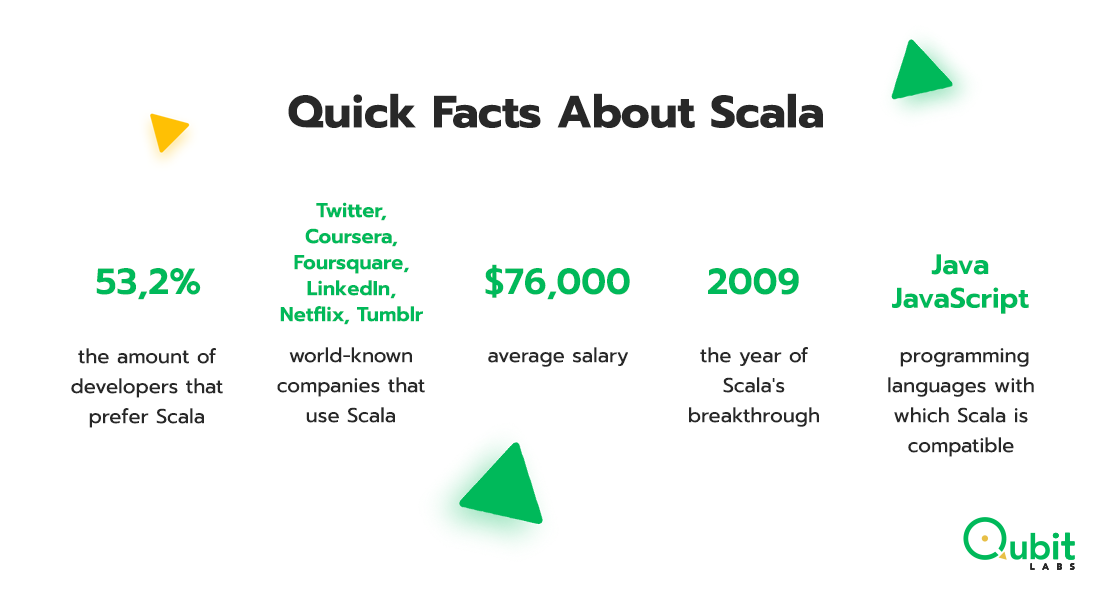 Why Do Developers Choose Scala: Benefits and Prospects

One can reasonably suggest that Scala is quite a complicated programming language, the sophistication of which, in its turn, enables Scala to carry out high performance and innovative solutions at the intersection of functional and object-oriented programming. It is considered to be a somewhat “academic” language and those who prefer something less difficult favor Python, Haskell, or Erlang. However, as they say, so many people, so many minds because, according to Stack Overflow, Scala is “loved” by 53,2% of respondents. Now, let’s do a quick recap of the main advantages that make Scala popularity rapidly increase, gaining the status of an effective and competitive programming language.

As we have already mentioned, Scala supports both object-oriented and functional programming. Scala enables to define types associated with data and behavior attributes. Like in other similar languages, in Scala, functions are the objects, which can be assigned to variables and transferred to other functions as the arguments. Besides, it supports anonymous functions and partial implementation of functions with several arguments. The combination of the mentioned elements allows writing concise programs.

Due to its functioning on a Java Virtual machine, Scala perfectly interacts with Java, meaning that the developers can utilize Java libraries directly from Scala’s code. It can be either applied the other way around; one can get Scala code from Java, writing the program with the implementation of both programming languages. This feature enables Scala to become a basic corporate programming language.

The main benefit here comes down to the compilator’s ability to carry out a full range of testing procedures. Hence, most of the trivial errors are being identified at the early stages. Static typing usually results in faster implementation of a compiled code because the compiler knows the exact types of the utilized data and creates optimized machine code. Even if there is full-coverage testing, some of the typing errors can’t be identified without static typing.

Thanks to the fact that many tech giants implement Scala, they also impact the language’s advancement; the frameworks, Lift and Play are the evidence of that. Many IDEs have started to support Scala and expand the community. Besides, this programming language is competitive, which can be proved by Scala salary; it is the highest compared to other programming languages. 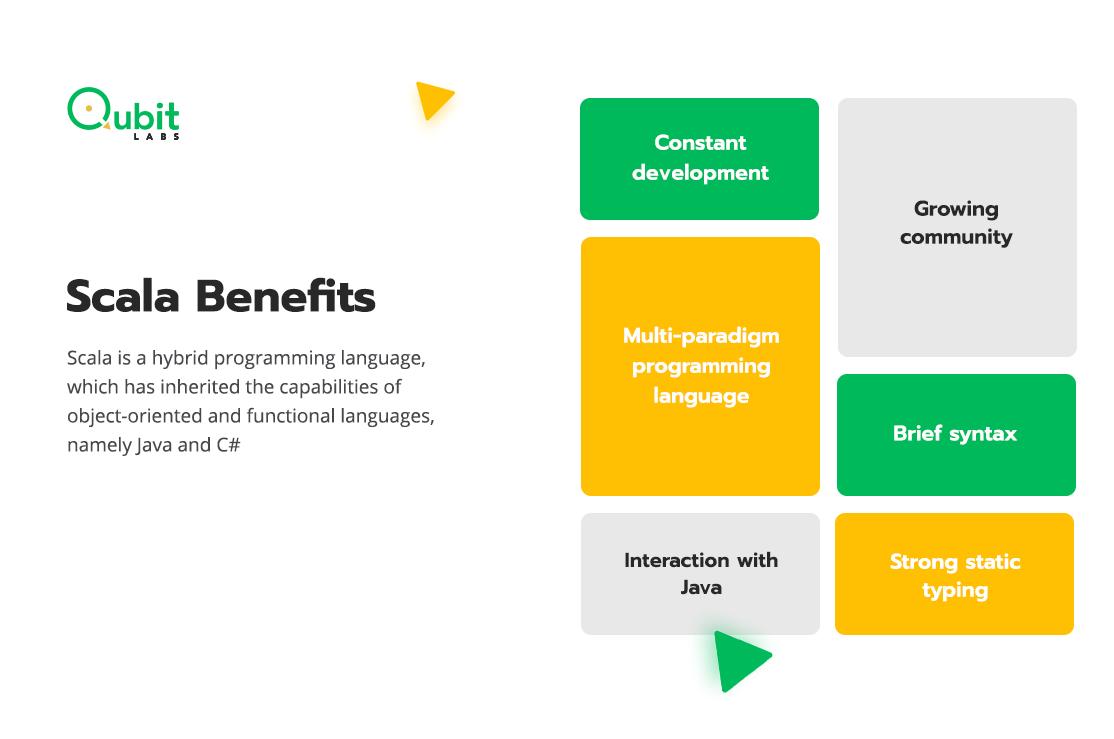 Speaking of that, it’s time to proceed to the next part of the article:

The freelance market offers numerous candidates to choose from, so you can easily find a developer with the desired skills, experience, and hourly rate demands who will meet the requirements of your Scala programming jobs. As can be predicted, the highest numbers can be seen opposite the US, Singapore, and Germany, which are $93, $91, and $95 correspondingly.

Nevertheless, when it comes to the estimation of the project, these numbers become multiple times higher, even for the countries where the developers seem to earn not that much money. Thus, it might be a more cost-effective and reliable solution to outsource Scala development.

Thus, Scala developers can significantly impact your company’s capacities and projects’ development. It has advanced functions and a large community, which can assist in finding the most suitable solution for the programs you decide to develop.

When it comes to Scala programmers, it might be challenging to build a team that will help you start projects off on the right foot. That is why so many companies decide to approach vendors to help them in outsourcing Scala development. It opens up numerous benefits, which will bring a valuable impact in the long-run.

If you have any questions, Qubit Labs will gladly assist in finding skilled developers, so feel free to schedule a consultation.

How to Effectively Manage Your Remote Software Development Team

How to Hire PHP Developers 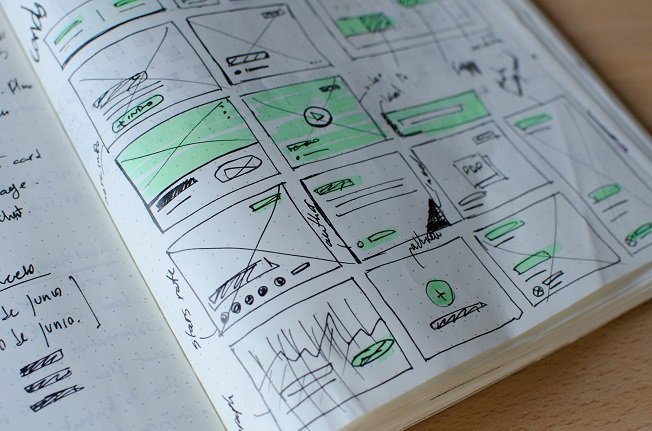 Should I Outsource Web Development?

In-House vs Outsourcing No matter, if it’s a startup you own or a large business, you must have faced this choice at least once. The concept...

What is Scala Used For? Qubit Labs can make bold to say that most Scala developers have transferred to it after Java because these are two similar...

Requirements In the era of transparency and cybersafety, crypto solutions are on everybody’s lips. Some companies have no idea about them, others...

Top 10 Digital Transformation Trends in the HealthCare and MedTech Industries

Our whole lives are currently happening under the auspices of overwhelming digitalization in just about all spheres of life. There are so many levels...