How much does it cost to hire developers in Ukraine? Learn More
SHARES

Guide to Mobile App Development. How to Create an App? (Updated for 2020)

When it comes to the internet presence, all business owners face a hard choice – mobile or web. In fact, this eternal question haunts the minds of many thinkers and trend makers. The thing is there will be no right answer because both sides have their strengths and weaknesses. However, if you know the details, it’s easier to weigh up all pros and cons to make a decision.

Today we are going to concentrate on the mobile development process and its cost.

The number of mobile phone users is growing annually by 4% on average. What do they do in the internet?

The hardest thing is to start. The fear of a blank page bothers not only writers; it’s a problem of all creative people. Although the first step is the hardest, you shouldn’t hesitate about estimating your app. After all, this service is mainly free, so you don’t lose anything.

We in Qubit Labs have faced two types of hesitating clients, and even compiled a brief guide for them to overcome their fear:

Myth 1: Clients who have been thinking about their idea of the mobile app, its design, and features for month and years. But they stumble upon the mobile app development estimation because financial issues scare the life out of them.

Myth debunked: an outsourcing company to find out the cost of making an app doesn’t bind a client to any responsibilities. Most of the software development companies gladly provide a free estimation.

Myth 2: Clients who wake up with an idea build an app but have no clue how to do it. They know the needs of their customers and the secret sauce of customer engagement, but they are far from being techie persons. So developing an app is kind of rocket science for such client. The issue is that it’s hard to estimate an idea without technical description.

Myth debunked: your hesitation over the features your app should have should not prevent you from consultation with phone app developers. These specialists know the right question to ask to understand your demands.

How Much Does It Cost to Build an App?

The simplest way to learn the price is to ask a smart search engine. It’ll offer you several app development cost calculators. These easy-to-use tools ask you a few questions about the app you want to develop. You choose the needed feature (description for non-tech persons included :)) and the estimation changes in real time. If the final estimation exceeds your budget, you can return to delete extra functions.

Be ready to choose one of the options in the calculator:

The tools like this help you not only to know the cost of making an app but also they shape your vision of features. How will your customers log in – creating a profile, via social networks or no logging in needed? What device the app is meant for – phone, tablet or watch? By answering these questions, you get a better understanding of your mobile app development project.

iOS and Android apps development start from the same price – $7000. If you want users to create personal profiles, add $3000 more, while logging in via social networks would cost you $4000. Developers will charge you $8000 if you need to create API. Depending on what design you want, the price will also change, so if you want just basic stock images, it will cost you at least $4000 more, if you want custom UX/UI, if you want your app nice and shiny it might cost you at least $ 8000 more. Want to add review system, then you should add around $5000 to your budget.

Of course, the price depends on how big and complex your app and design are; if you have a basic app – it will cost less, if it’s a complex and custom-designed app with the back-end, chats, personal profiles and shopping carts. Also, the app development price depends on the country.

But as you can guess, such app estimation is rather rough – different tools are based on different criteria, so the price range can vary greatly. None of the app calculators will provide you a precise cost of app development. It just shows an average price of this or that feature for you to be able to plan a budget; phone app developers get a better understanding of the scope of work even before the client makes up any technical description. 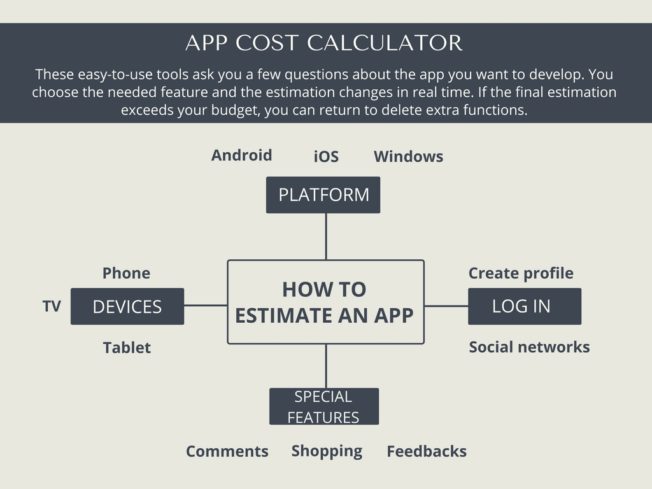 Gig economy allows hiring software specialists all over the world, and addressing a freelancer to estimate your app isn’t a big deal. They will gladly offer you their services on widely-known Upwork or Fiverr, but in this case you’ll have to make a payment even for a rough estimation, and you cannot be sure of its quality. Some savvy persons will promise you whatever you want – make your dream come true for a ridiculously low price, but it’s a first sign that something goes wrong. Beware of the situations like this.

Besides of app complexity that influences the cost of making an app, there is one more criterion when it comes to choosing a vendor – proximity. If you live America and hiring in-house local developers will cost you a fortune in comparison to outsourcing. Let’s have a look at some the lowest prices in different parts of the world:

Mind that the higher price doesn’t guarantee you good quality. However, low cost of app development can be fishy. Sometimes clients of outsourcing companies do not realize the relation between low price and same low quality.

Estimate the scope of work for each stage of app development and, subsequently, precisely estimate app development cost isn’t a piece of cake. Developers who give a quote have to know and understand the final goal. They need to be tech-savvy to estimate man-hours for each feature. That’s why only senior specialists are involved in the estimation process.

Broadly speaking, estimation can be divided into two stages:

1) Initial mobile app development estimation
Most of the outsourcing vendors offer this service for free. The initial quote is rough but it allows to “guesstimate” the budget needed for building an app before signing a contract. This stage usually lasts a few days, but in some cases it can take up to 2 weeks.

More precise estimation is warranted by a contract with fixed terms, stages of development and detailed description of the final product stated there.

Sometimes it happens that initial estimation changes because of product reconsideration. Logically, if you add more features, the scope of work grows as well as the price does. It’s good if your outsourcing partner has an experience in making similar mobile applications as they will spend less time on estimating the similar task – they have already worked up best practices, so they know what technologies to use and how much time it takes to complete such task. If you order building a unique app, estimation process might take longer and vary during the development process.

Thus, the scheme of app development process looks like this:

This is the most spread type of apps for mobile devices. Modern smartphones can access all websites. They support any option available in desktop versions – HTML5 support does its work.
The web app is a perfect solution for a startup as it allows to get a great result for relatively low cost in short time. Mobile websites are cross platform which is their advantage in comparison with the rest of mobile apps. But at the same time, it’s a drawback as cross platform web apps are hard to develop.

This kind of application created by means of Xamarin development gives you a chance to benefit from API operating system – your app gets push notifications and other perks, and you can upload your product to stores. At the same time, the main content is platform independent page kept on a server. Thus, you can make minor changes in your product without releasing new versions. Simply upload changes to the server.
Hybrid apps are meant for those who are starting their business or who want to try out their idea and show it to friends or investors.

This is the most demanding type of apps, and it allows to use maximum options offered by a particular operating system. As a result, native apps are better in terms of functions and speed. The majority of companies that used to build hybrid apps arrived to such conclusion. For instance, Facebook started as a hybrid app combining both web and native components. At first, it seems to be a good solution, but modern developers avoid it because of performance issues.

Popularity
iOS app development is popular with people from the USA and Western European countries.

iOS Devices
There are about 20 iOS devices of different screen size, this lack of variety facilitates both designing and testing.

Release of iOS app
In order to upload your app to AppStore, you need to follow their strict rules. One more drawback is long approvement period.

Android programming languages
Java is used to build Android apps. This tech skill is rather widely spread, so the sum of your investment can be lower.

Java language has a large community, so finding support won’t be a problem.

Android devices
Android developers create apps that run on a huge variety of devices which is a disadvantage for programmers – they need to adapt the design for each gadget(create the responsive design). Testing also becomes more problematic because of such variety of screens your app will be shown on.

Android app release
In comparison with AppStore GooglePlay is the easier way to introduce your product to the community.

How to Create an App?

So, you made up your mind about the app you want. And now when you know everything about estimation process it’s time to lift the veil of mobile app development. Let’s see what happens after you approach an outsourcing company with your idea. 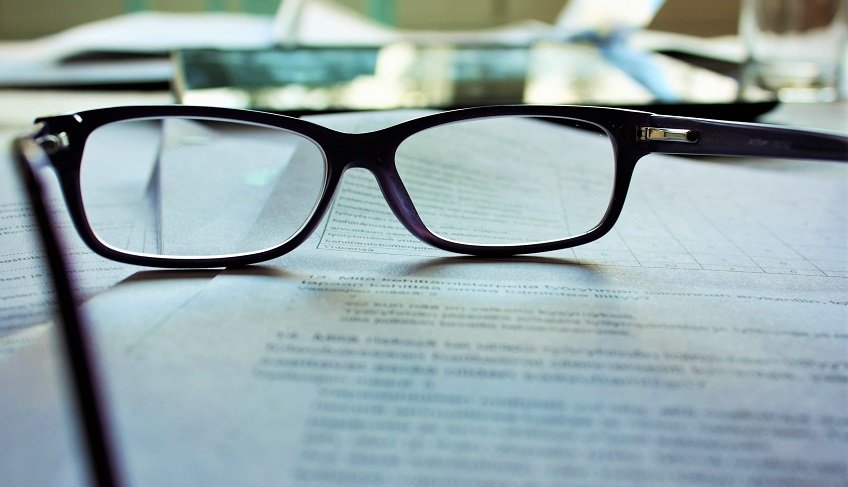 Research On Artificial Intelligence Companies and Job Market In Ukraine

Corona: Crisis Is An Opportunity To Grow Online

The impact of the Coronavirus has extended far beyond the concerns of health. It has set its claws on the economy, affecting industries all over the...

Svitlana Rumyantseva
Project Manager
Svitlana is a PM with legal education and PhD degree in political science. She has experience in managing in-house and offshore/nearshore software development teams including freelancers. She is sure that smooth communication and motivation is the basis of efficient teamwork and successful projects. Svitlana is passionate about networking, achieving great results and acquiring new knowledge.
Previous
Average Software Developer Salaries: Salary Comparison by Country 2020
Next
Qubit Labs Listed Among Top Staff Augmentation Companies 2018 by Clutch