How Many Programmers are there in the World and in the US? [2023]

The IT industry is rapidly expanding, experiencing a growth in the number of specialists interested in working in this area. How many software engineers in the world are there now? Around 26,9 million, according to Evans Data Corporation.

The total number of developers in the world is constantly growing and is expected to surpass 28,7 million by 2024.

It’s not surprising that this industry is in the leading positions among other areas that bring high incomes to the countries in which they’re developing. The IT sphere offers numerous benefits to the employees and attracts them with the opportunity to create products that have all the chances to change the world.

The tech sphere has many directions which people can follow and fulfill their potential. So let’s take a closer look at how many specialists worldwide took their chances to work in one of the most actively growing industries. 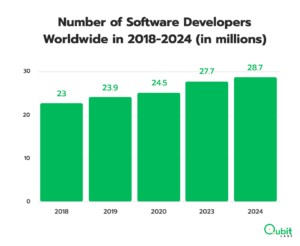 According to the latest data, there were 23 million developers in 2018. This number increased by 900k by 2019, and there were over 24,5 million IT professionals in the world in 2020. As for 2023, the researchers expect this number to reach 27,7 million due to the constantly rising software engineer growth rate. And in 2024, as we have already mentioned, there will be around 28,7 million developers in the world.

As per the information above, currently (in 2022), there are 26,9 million software developers. And around 4,4 million of them are located in North America.

Not surprisingly, the biggest number of software engineers is in the US because the country has an impressive amount of tech hubs and offers immense opportunities for development in this sphere. Also, the US boasts a skyrocketing software developer growth rate.

Now, let’s move to review the US more in detail. We’ll pay closer attention to the states considered the best for software developers to live and work in 2022 by Zippia.

How Many Software Engineers Are There in The US 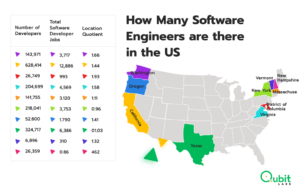 As you can see, Washington outperforms California, being the best state for software developers. There are 143,971 developers in Washington, yet it managed to be the strongest in average score per developer. Besides, it offers a lower cost of living for skilled programmers compared to California. Also, the location quotient shows that the concentration of programmers in Washington compared to the nation as a whole is 1,66.

There are around 1,365,500 software developer jobs available in the US, and this number is expected to increase by 284,100 in 2028. When addressing the question “how many programmers in the US are there,” it’s also necessary to take into account the employment rate for tech specialists. It is expected to grow by 21% within the mentioned period.

In California, in contrast, there is the highest number of programmers, 628,414, but its location quotient is 1,44, which is lower than in Washington and a couple of other states. Despite California being the most developer-saturated state, the proliferation of tech specialists happens beyond Silicon Valley as well. That’s why the number of software developers in the US is constantly growing all over the country’s territory.

Job postings in the US by technology

(the number of job postings in this table is contrasting to the ones mentioned above because we used different ways of searching data. This one is manual, and the previous was mentioned by source)

The data mentioned in this graph helps us to understand whether the supply and demand correspond and the programmers specializing in which technology are sought-after in the country.

However, the demand differs from state to state. For example, the need for mobile app developers in California is the highest (1,959 vacancies), while in New York, this number is lower at 3% (659).

So, the number of software engineers in the US matches the demand in developer-saturated states, but in smaller ones, the recruiters have to put effort into finding suitable candidates.

How Many Engineers Are There in the World: South America

If you’re wondering how many people know how to code in Latin America, the numbers might exceed your expectations. The thing is that the tech sector is skyrocketing in this region, and many world-known companies opt for local developers because they offer high-quality services for lower prices.

Based on the data from GitHub (or on the number of registered accounts from Latin America, to be more specific), there are:

However, according to our research, Mexico produces around 110,000 tech graduates each year and has 300,000+ software developers. As for Argentina, there are approximately 115,000 tech specialists. In Colombia, there are 64,600 software engineers.

In 2022 we can see a huge increase of software engineers in all Latin America, every year tech universities graduate more and more programmers from that region which makes Latin America one of the biggest IT hubs in the world.

In case you’re interested in outsourcing to Mexico or Argentina, you’re welcome to read our guides. 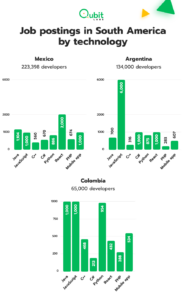 As we already know about how many programmers in the world come from South America, it’s time to pay attention to the availability of vacancies for local specialists.

According to our findings, JavaScript (8,000 vacancies), Java (2,808 vacancies), and React (3,432 vacancies) are the most popular technologies in the region, and the developers specializing in them are in good demand.

How Many Software Engineers in the World: Europe 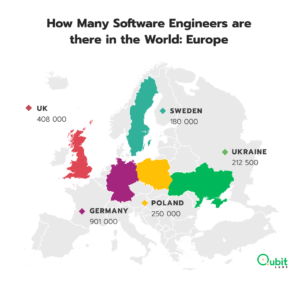 How many software developers are there in the world? 26,9 million.

How many software engineers are in Europe, then? Around 1,95 million.

Although Sweden has 180,000 developers, Poland — 250,000, and Ukraine — 212,500, the smaller talent pools don’t impede them from advancing their tech communities and playing critical roles in the global tech market.

Job postings in Europe by technology

The total number of software development vacancies in Europe is 78,081. It’s hard to single out one technology that is the most requested in the region among the companies because they all are on similar levels.

Since Ukraine is a country that has entered the IT industry by leaps and bounds and is the top-requested outsourcing and R&D destination, let’s see where the highest concentration of software engineers is in the country.

How Many Engineers are there in the World: Ukraine 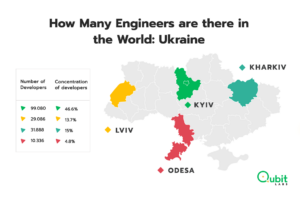 As you can see, the highest percentage of developers is concentrated in Kyiv (46,6%). Kharkiv and Lviv follow next with 15% and 13,7% correspondingly. Odessa closes the list with 4.8%.

Job postings in Ukraine by technology 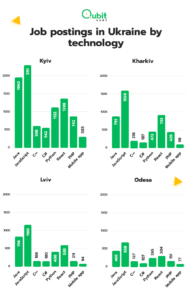 Based upon the mentioned data, the highest concentration of vacancies is in the JavaScript category. There are 6,508 job postings among companies in the major tech hubs.

The number of Android developers and iOS specialists in Ukraine is almost equal, so 572 mobile developer jobs are available.

How Many Programmers in the World: Asia

Asia has an impressive number of software developers — 6,540,000. Its vast talent pool and salaries that are several times lower compared to the US attract many foreign companies to the region.

Job postings in Asia by technology 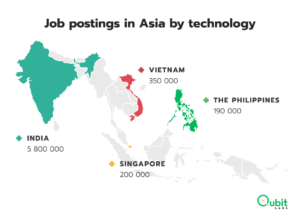 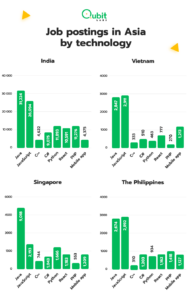 As per our research, there are 143,803 vacancies opened in the region for the mentioned technologies. The global giants cooperate with Asian developers because they can deliver services within a short period and expect lower payments compared to their American colleagues.

Feel free to check out our guide to software development outsourcing in Asia to know more.

How Many Programmers in the World: Australia

According to the websites that specialize on posting vacancies, there are around 4,703 available jobs in Australian tech hubs. The most significant amount of developers is required by the companies located in Sydney.

Job postings in Australia by technology 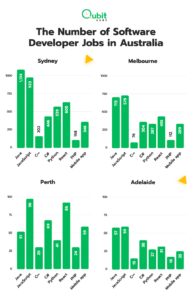 Having analyzed other websites with job postings and taking a more manual approach, we found out that in Australia there are 7,890 vacancies for the developers specializing in the mentioned technologies in Sydney (4,350), Melbourne (2,815), Perth (455), and Adelaide (270).

How Many People Know How to Code: Analyzing GitHub Accounts

The information about GitHub accounts helps to figure out exactly where the world’s software developers live.

According to it, the most considerable number lives in the US, namely 651,017 developers. And an impressive amount of them resides in the San Francisco Bay area. 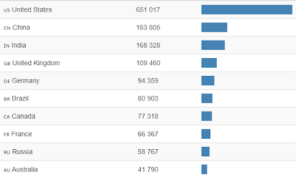 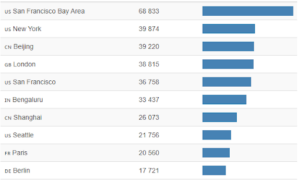 How Many Developers in the World are Looking for a Job?

Another critical statistic in our opinion is the number of developers in different areas that are currently looking for a job. Based on the research conducted by StackOverflow, in which 65,000 respondents took part, the number of software developers searching for new job opportunities ranges from 15,5% to 19,3%, depending on their specialization.

There are 26,9 million developers in the world. Therefore, any company looking for skilled specialists to add to its team has a high chance of finding a “perfect match.” You aren’t limited by the countries’ boundaries and can choose the developers globally instead of locally.

If you need help finding experienced software engineers for your project or consider outsourcing some tech tasks, feel free to reach out to Qubit Labs.

Having considerable experience in the IT and outsourcing markets, we understand all the nitty-gritty of building successful software development teams. We are always proud when we build a strong business relationship with our clients, especially when they stay with us for years. Even during the hard...