Once Israel business start to think of a new tech venture, a question how to hire developers in Israel arise. Indeed, modern startups find it challenging to hire programmers there. Israel is a country that is a top startup producer.

There are tech hubs of most tech giant and hundreds of small companies. The quantity of developers in the country makes the hiring of local developer next to impossible. Most skilled developers are already reserved for full-time development jobs at Google, Microsoft, or Facebook in their development centers in Israel.

But does that mean that companies are doomed to failure?

Should they invest thousands of dollars to recruit top software developers?

Can they beat the salaries of tech giants?

A viable option is to hire developers in other countries. They should pay attention to those where the pool of tech talent is large and prices for software development are more affordable than in Israel. For example – hire skilled team of developers in Ukraine.

Let’s dwell on the benefits of this country in terms of outsourcing software development. Let’s see why we suggest it as an alternative to hiring skilled developers locally.

Why Israel Should Consider Ukrainian Programmers?

Hiring programmers for startup in Israel is gaining popularity. 45% of Israeli companies have already chosen Ukraine as their top offshoring destination. 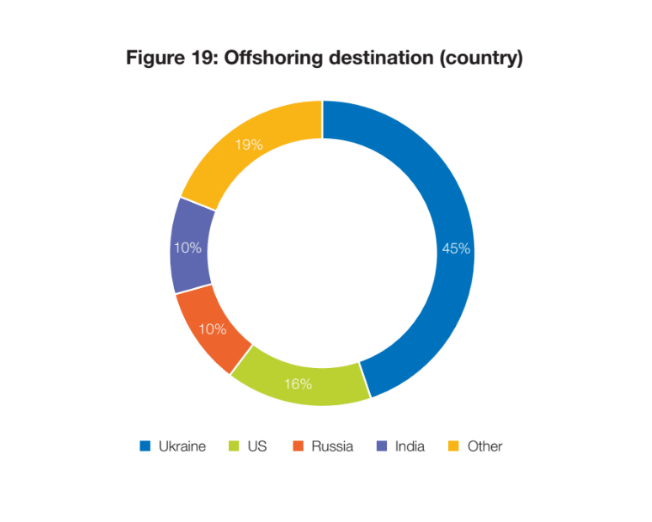 And here are some advantages of cooperation between Israel and Ukraine:

1. A large pool of developers

Israel is a small country; its territory and population size are a bit larger than the Kyiv city.

Any Israeli company will find the range of candidate offers to be impressively wide. In 2017, the number of software and hardware developers in the Ukrainian labor market exceeded 127,000 – an impressive pool to select from.

This variety of choice enables finding a developer and improves the overall project outcomes for any Israeli startup.

In 2018, the Ukrainian outsourcing industry exceeded $3.6 billion in revenues, exhibiting a steady 20% growth from year to year. It’s evident that Ukrainian developers are valued globally. Many foreign companies choose to find developers for startup there.

2. The same quality for less money

Hiring Israeli developers cost a pretty penny now. For a regular company, hiring programmers in Israel locally may be an unaffordable luxury at least at the start. Let’s look at some figures:

These are just a couple of figures to consider when you look to hire developers; this comparison shows that Israeli businesses may easily get a talented and experienced developer to their team cheaper than they would get a local junior developer.

A really great deal, isn’t it?

Most Ukrainian developers are very good at English and speak Russian as their mother tongue.

There will be no problem in project-related communication, while mentality and language differences will hardly hinder the project outcomes.

4. One time zone
It’s always comfortable to work with an outsourced team located in the same time zone; no delays, possibility of joint online work and real-time communication are valuable bonuses of collaboration with developers.

5. Free trade zone
The FTZ will be created between Israel and Ukraine soon, which means the removal of customs duties. If you wish to find a developer to whom you won’t pay extra for the international salary transfers then it’s a best place.

6. Visa-free regime
No visas are required for Israelis to visit Ukraine, and for Ukrainians – to visit Israel.

This means mobility of your development team; your outsourced developers may come to work in your Israeli office or you can visit them in no time if such need arises.

7. Experience
Local vendors of IT outsourcing are highly experienced in matching candidates for startups and large companies. They will help you find programmers for startup of any kind quickly and efficiently by locating the best developers in the market.

8. Soft skill matching
If you collaborate with a vendor, its recruiters select job candidates not only by hard skills you need, but also by soft skills for your project and company, as Qubit Labs does that. 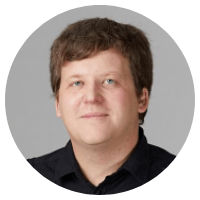 Earlier we talked to Stas Oskin, a Co-founder, Core Dev and Biz Dev at WINGS, a Switzerland company with offices in Saint Petersburg, Puerto Rico and a small office in Tel Aviv. WINGS is a global international project with huge potential –  a platform that accelerates new companies growth. They decided to hire developers and set up a dedicated team. What was important for them and what influenced the decision is cultural match and developed soft skills.

“We decided to outsource and to create a software development unit in Kyiv because we were looking for a country with a western way of thinking to outsource our development. We believe that this is a place for it.”

9. Convenient remote employment
It is hard to relocate developers to Israel because of complex documentation, work permits, and other bureaucracy. It’s much more convenient to collaborate with them remotely. If you are interested in relocation mainly – Qubit Labs provides recruiting & relocation service.

10. No legal trouble
Hiring development team in Ukraine is safe in legal terms; the worker is officially employed in Ukraine, hired and fired by the vendor in case the client deems him/her non-suitable for the job.

The developer can sign your company’s NDA, so all sensitive data is protected. In case the employer wishes to hire the worker full-time, his/her buyout sometimes is possible after some time of recruitment via a vendor.

If you plan to hire programmers for an Israeli startup, consider Qubit Labs as a trusted talent vendor. We offer ready recruitment solutions to tech companies needing developers, QA, PMs, and other talent for getting their business operations run smoothly. Moreover, we work with several Israeli startups and have hands-on experience with this market. Many clients already appreciated the quality of service we rendered, and here are the reviews from our clients. You can look for more reviews about us on Clutch. 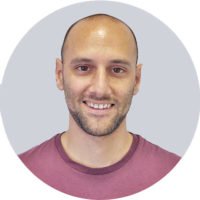 “Why I chose Ukraine to hire developers for my startup? I had a good experience of working with them [Ukrainian developers], so it was an easy decision for me. I’m sure that a dedicated team model will work for our startup. Earlier we had a developer in Israel, but then I decided to move all development to Ukraine.
Also, here you can boast about strong game industry. Such game dev companies as Plarium, Playtika (those are Israel’s companies) hire many Unity developers, so the market here is well-developed. There are good Unity developers, better than Israeli ones I think. For companies like yours, there is a huge potential for working with the whole Israel market, and not just with the Unity market.”

Qubit Labs at Your Service

Hiring developers that will not mess your startup up is a headache. So, if you want to find developers for startup there is no need to address the challenge on your own.

Qubit Labs is ready to help you with finding and hiring developers to build a dedicated team offshore! We are in the market of IT outsourcing for a quite long time. We can give recommendations about market and recruiting here. Contact us to schedule a call to ask any questions!

How to Hire a Programmer Even If You Are Not a Techie?

How to Build an Effective Offshore Software Development Team with Staff Augmentation?

Things You Should Know Before Hiring Developers In Ukraine

Qubit Labs started a special webinar series about Recruiting and HR management. On the first webinar we talk about specifics of hiring IT talents in...

How big data analytics can improve your business?

In the last decade, Big Data business has flourished globally. Let’s start with what big data is. In plain, it is extremely large data sets that...

Iva Kozlovskaya
Managing Partner
Iva Kozlovskaya is a Managing Partner of Qubit Labs. Iva has been working in operations, sales and project management from the beginning of her career path. Nowadays Iva runs her company that helps clients from the USA, Europe, and the Middle East to establish their development teams in Ukraine.
Previous
Qubit Labs is Hosting “Innovate with InsurTech” Webinar
Next
Top 30+ Web Development Companies
This site uses cookies. By using our site, you agree to our Terms and Privacy PolicyAGREE
Privacy & Cookies Policy