What is the first thing you want to know about outsourcing? Normally businesses outsource a part of their workflow to other companies to cut the costs; and it’s obvious that all of them are interested in the app development rates. But when it comes to showing app development rates, the things are not that straightforward as they seem. Although they boast about transparency and client-oriented approach, you’ll hardly ever find their price list on the website. We decided to conduct an honest and unbiased research on the average cost of app development in Europe to reveal the hidden truth about outsourcing in 2018.

According to Clutch rates 2018 are:

The whole research took us two weeks. We spent this time on selecting companies, contacting and emailing them to collect the needed data. At the same time, we asked our in-house developers to estimate the same project, but they weren’t informed that the estimation was a part of the research, so that they didn’t underreport the time or rates.

Our first task was collecting a database of European software development companies, with mobile app developers in particular. As you can guess there are hundreds of them in the region, so we had to choose only a few. What factors did we pay attention to select our “sample group”?

– providing app development services;
– working only with local teams;
– the no R&D offices in Asia;
– have proved experience.

All the participants including our mobile app developers received the same technical description of the product. Their task was to develop an app for iOS and Android that would determine location with GPS, filter the data according to user’s inquiry and synchronize with Google Maps as well as with Google Calendar.

Our mobile app developers said they would need about 400 hours to build an app like this. So did our Western colleagues, and the only convergence. Now let’s the hourly rates by country in details.

The Netherlands
Netherlands is the country with the highest response rate. 40% of companies weren’t afraid of showing their hourly prices that vary from $100 to $115. One of the companies warned that creating the app would cost us more $60k.

France
To our surprise, this country offered the lowest software development rates – only $15-30. Such prices are untypical for the Western European region, so they put us on the alert. Indeed, we found out the company has an R&D office in Africa, which allows them to reduce prices significantly.

Norway
Norwegian app development companies ignored our messages, so we took the prices from Clutch:
The companies that claim themselves Norwegian charge $50-99. Asian R&D changes the financial situation dramatically, as the prices drop to $25-49 if there is an office in Vietnam or India.

Belgium
Speaking by our short experience of communication, this is the country with the rudest account managers. They didn’t give out their rates, and actually refused to take our project because such product would be hard to sell.
And again, we took the prices from Clutch, and the spread between the lowest and the highest hourly rate is shocking – from $25-49/hr (probably with a hidden R&D in Africa or Asia because the rates seem too low for the region) to $300 (no, it’s not a typo!)

The United Kingdom
The UK appeared to be quite responding too, but that’s probably the only positive feature. You have to pay $54-74k as a minimum, and up to $100k. One company even boasted about making an app for $1 million. 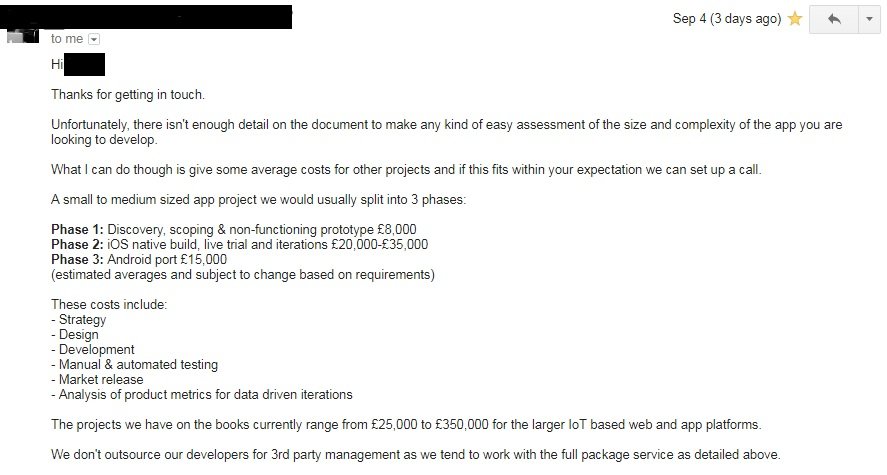 Ukraine
And, finally Ukraine. It stays in the golden middle, being neither suspiciously cheap nor unreasonably expensive. So, if the average price of app development in Western Europe started from 60k, here in Kyiv you can have your app built paying 4 times less. Average hourly rate for software development would vary from $30 to $45, depending on the team you need to hire.

Difficulties and peculiarities of communication with software development agencies

We faced the first challenge where we’d never expect to face it. The initial stage of every research is creating a relevant database, and that’s where we got stuck. Finding a software development company without R&D center in India, Pakistan, or the Philippines appeared to be not that easy job. So, instead of selecting a dozen of candidates, we concentrated on taking 3-5 respondents.
Thus, one of the pitfall an average client will come across in finding a local team.

Not only will you hardly find their prices on the website but also nobody will reveal the rates in the very first message. You’ll have to write them persistently, and follow them up to get the idea of the average software development rates. 68% of conversations start with the offer to talk by phone or Skype. It’s vendor’s way to check if you’re a real person, and in some cases to sell you more services than you need. But from the client’s part, such procedure steals the time if all he/she needs is compare prices for developing the app and check if the budget covers the expenses.

Living in a developing country doesn’t work in your favor. If a webmaster tracks your IP address and the country you come from doesn’t look rich enough, the chance that the agency will answer you is slim to none. Or they will consciously overprice your project to avoid a lowlife. “Unfortunately, I don’t think we can help as the budget you have indicated would be lower than our minimum threshold for a project. […] That being said we also don’t work with startups, so this isn’t the sort of project we’d be able to help with anyway.”

We don’t believe in stereotypes, but there is no smoke without fire. Norway appeared to be very reserved – we didn’t get any answers from them. What’s more, they don’t have a contact form on the websites, and a half of the emails weren’t delivered as the indicated addresses do not exist at all. The country was listed among the ten best countries for business, but if you are looking for app development, that’s probably a bad idea to address a Scandinavian company.

The responsive rate of French companies is also pretty low. However, it looks like they are not interested in soliciting customers as they are “fully booked for 2017”. Usually you expect any counter-offers to start cooperation ASAP, but it wasn’t the case. The possible explanation is skill shortage, they would gladly grow their team to process more tasks, but they simply lack technical specialists in the area.

One more reply from France, and one more surprise. The website of the company states that it has a single office in France. But we discovered they have got an R&D center in Africa in the course of communication. And the suspiciously low prices for Western Europe only double proved it.
Why hiding? Firstly, clients prefer local teams considering them more reliable. Secondly, remote R&D office makes development cheaper. However it doesn’t necessarily mean that the client pays less. Tricky vendors feather their nests on the price difference.

A half of respondent companies specialize not only in software development but also in marketing services. So, be ready for refusals explained by lack of marketing value of your product idea. The following reply “People that are looking for those information use Google to find what they need, they will not install an app, and if you want to make Google, the budget is unlimited” sounds neither professional nor polite, just “back off” put into other words. Are Belgian agencies really so spoiled by choice of clients?

A rough technical description is not enough. Instead of just prices, you’ll definitely get lots of tech-related questions. And if you’re not a tech person, European vendors unlikely will help you with solving them or at least explaining what is what and why it is important. If you have the idea, you must know how to materialize it. 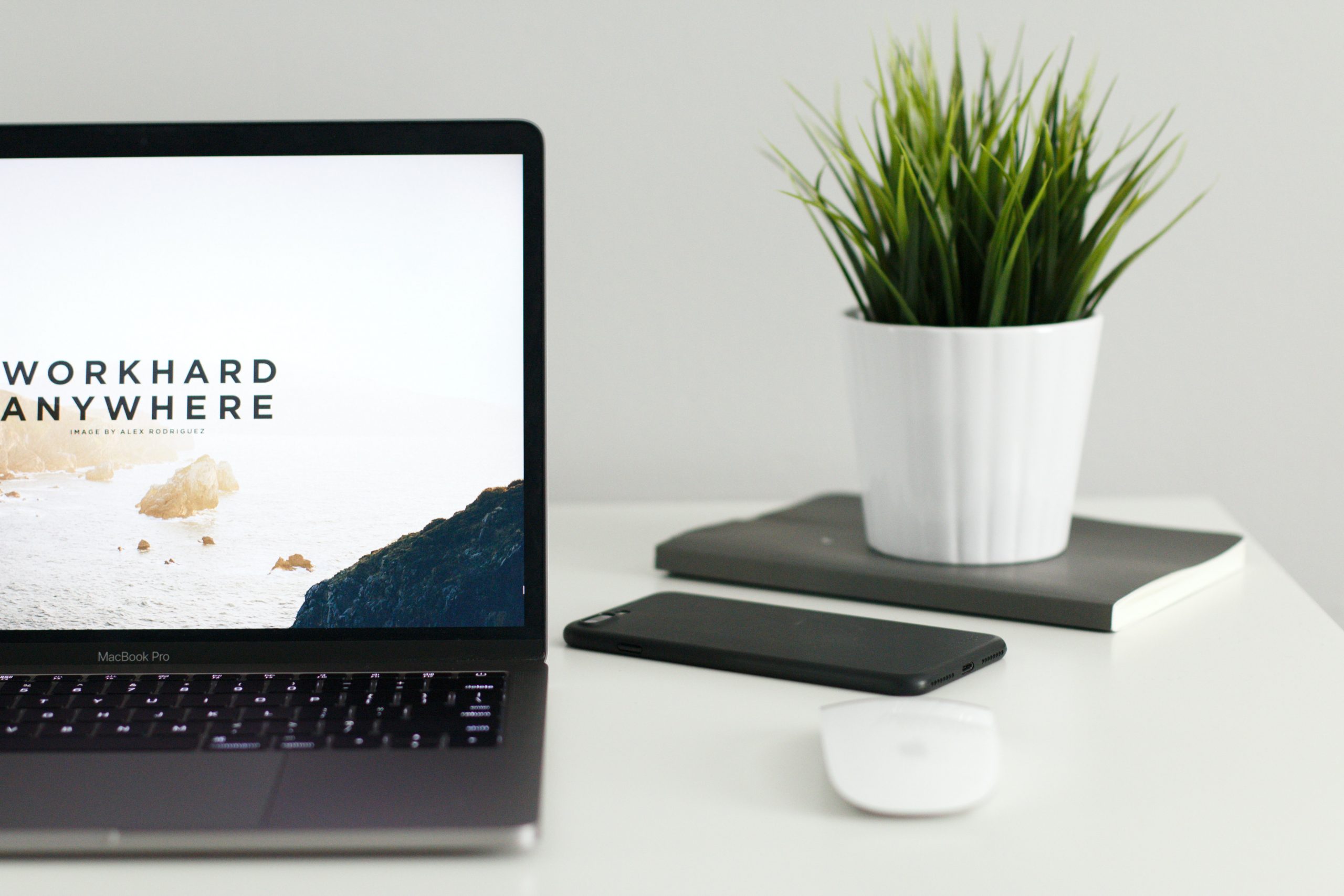 Considering the current situation in the world, many companies have decided to change their usual working conditions and switch to remote teams,...

Offshore Development Team vs IT Staffing vs Project-Based Development: What Works Better?

Offshore Development TeamIT StaffingIT Projects OutsourcingWhat’s Your Ideal Fit? The world is changing, and so do the models of recruitment and... 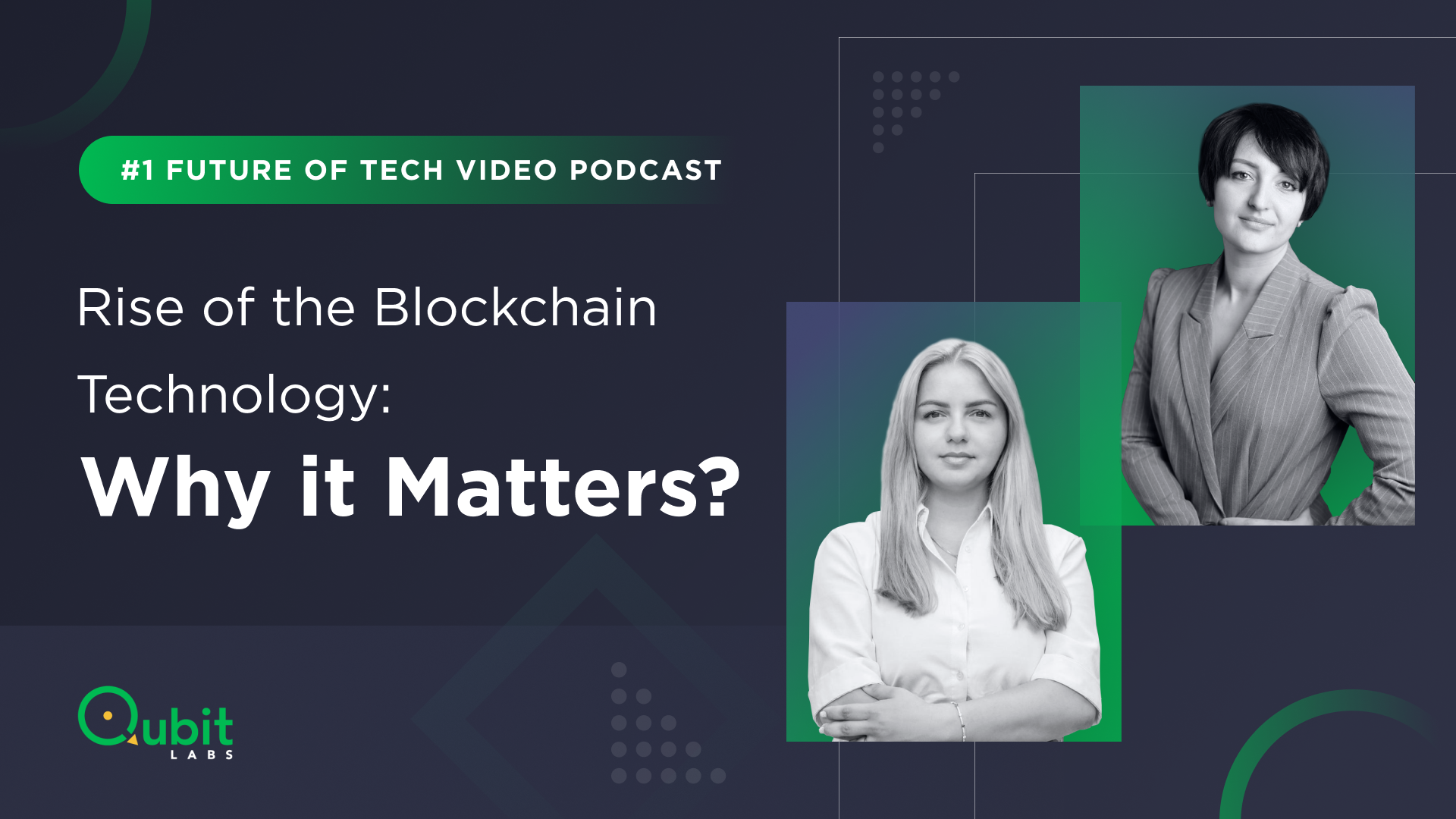 Rise Of Blockchain Technology: Why Does It Matter? – Interview

In this “Future of Tech” episode interview learn about the future of Blockchain technology, its potential, and risks. At Qubit Labs...

Elena Kononchuk
Recruiting Team Leader
Elena is a ex-Team lead of recruiting team and head hunter with experience in providing full cycle of recruiting process, managing candidates pipelines, creating and executing multichannel sourcing strategy to find candidates meeting client’s needs.
Previous
Top 5 Reasons Why IT Outsourcing to the Philippines Is in Demand
Next
What Is ODC — Offshore Software Development Center?
This site uses cookies. By using our site, you agree to our Terms and Privacy PolicyAGREE
Privacy & Cookies Policy